Trust Not Those In Whom Without Some Touch of Madness 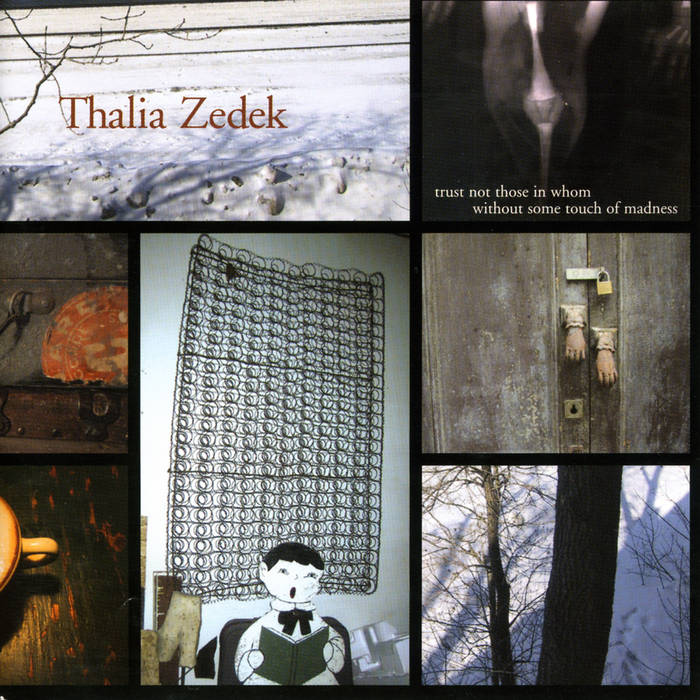 "The title of the record was actually a fortune that I once got when I was living in NYC in the late eighties. It was really a rough period in my life. I was sitting in some crappy Chinese restaurant, we had eaten and were given the fortune cookies with the bill. I opened my cookie and my fortune had actually been cut in half horizontally, and then Scotch-taped back together with the bottom half of another fortune. Poet at the fortune cookie factory? I kept it for years."

Having sung with such widely respected underground alternative bands as Come, Live Skull, and Uzi (among others), front woman Thalia Zedek has enjoyed quite a long and illustrious career. Zedek started in the early '80s in the all-female Dangerous Birds. ("Smile on Your Face," was featured on the infamous Sub Pop 100 compilation.) By 1983 Zedek had left Dangerous Birds and formed Uzi, which managed to release only a single EP during its existence -- 1986's six-track Sleep Asylum. Later that year she moved to New York and joined Live Skull. By the early '90s Zedek had left Live Skull and relocated back to Boston where she formed Come (along with former Codeine drummer Chris Brokaw). The new band's first release was a single, "Car/Last Mistake," for Sub Pop's monthly singles club which was followed up by 1992's Eleven:Eleven, 1994's < I>Don't Ask Don't Tell, 1996's Near Life Experience, and 1998's Gently, Down the Stream, all on Matador. In 1998, Zedek was invited by the Indigo Girls to join them on their multi-artist Suffragette Sessions Tour. A few years later in 2001 she released her debut solo album and her final for Matador, Been Here and Gone. The following year Zedek, along with what now forms her band, released You're A Big Girl Now on Kimchee records.

When You're a Big Girl Now was made, the songs were new and the band was still finding its voice as a unit. Now, after touring together for two years, the band made up of Daniel Coughlin (drums, also played drums on Gently, Down the Stream) and Dave Curry (viola), play with much assurance and familiarity. Curry and Coughlin add mournful viola and driving drums to the hypnotic rhythms of Zedek's guitar and deliberate vocals. The songs on Trust Not Those in Whom? are personal and powerful. For example, on the dark and compelling "Bus Stop" Thalia explains: "Bus stop is actually a bar right around the corner from my house. I sometimes go there a lot, depending on my mood, and yes (not unlike a more well-known Boston bar) they do know my name there". The album was recorded by Howard Bilerman at Hotel 2 Tango in Montreal using completely analog techniques without any use of computers or Pro Tools. The record was recorded and mixed in eleven days. Guest musicians on Trust Not Those in Whom? include Jonah Sacks who drove up from New York on a day's notice to add cello to the melancholic waltz of "Bone", and Harris Newman whose lap steel adds the sense of abandon to the resigned melody of Mel Lederman's piano on "Evil Hand". These touches are notably restrained yet undeniably powerful additions to the pointed and dark songs of Thalia.

Her songs, like the blues, speak not about the struggle to survive, but to the struggle of surviving. Although the subjects of the lyrics are often less than happy events or situations, the music reflects the overall message of strength and optimism. This is not a surprise coming from Thalia Zedek, an artist of enduring quality, who is one of the most compelling and strong performers wielding a guitar today. Trust Not Those in Whom is the finest recording of her career.

If you like Trust Not Those In Whom Without Some Touch of Madness, you may also like: